One of the youngest Washington counties, Grant County was named after Ulysses S. Grant, Civil War general and eighteenth President of the United States. The county was established in February 1909 by an act of the state legislature and signed by Lieutenant Governor M.E. Hay, acting on behalf of Governor Samuel G. Cosgrove, who was ill.

During the territorial days of the 1850s, stock raising was the principal industry in Grant County. Thousands of cattle and horses roamed the country’s grassy hills during the summer. In winter, they could be found in the lowlands of the Columbia River and the surrounding basin. By the 1880s, however, cattle and sheep gave way to agricultural production as the county’s primary industry.

During the 1880s, Grant County was opened to homesteading by President Grover Cleveland. Numerous towns were platted during this period as people streamed into the county. Fertile soil and abundant sources of surface and groundwater promoted the development of fruit orchards. Large orchard tracts sprang up around towns like Moses Lake, Stratford, Grant Orchards, Coulee City, Quincy, and Trinidad. During this period, tree production – mostly apples – peaked at around 1,000 to 1,200 carloads per harvest.

By laying tracks across Grant County between the late 1880s and the early 1900s, several major railroads provided transportation vital to rapid growth and expansion in the county. The Great Northern, the Northern Pacific, and the Chicago, Milwaukee and St. Paul railroads provided the means of transporting agricultural products, machinery, supplies, transcontinental passengers, and mail into the county.

Most of the gains made during the late 1880s and early 1900s, however, were soon erased. Coinciding with the post-World War I depression, severe and prolonged droughts hit the region. In Grant County, crops failed, the bottom fell out of the agricultural market, and many farmers were forced to abandon their land.

It was not until 1933, after much prodding and debate that the United States Congress intervened. It did so by authorizing the construction of the Grand Coulee Dam. The act, however, was not without condition. County landowners have assured no irrigation water until they organized irrigation districts and agreed to pledge a certain dollar sum per acre based on soil quality.

In February of 1939, an election was held to create the first of three irrigation districts which formed the Columbia Basin Project. The Quincy Columbia Basin Irrigation District included more than half the irrigable land in Grant County. The move was successful, as were those to form the East and South Districts a few months later. Consequently, the county was able to irrigate its land with much-needed water from the Grand Coulee Dam.

During World War II, Moses Lake became the home of Larson Air Force Base, a training facility for American bomber pilots and their crews. With the conclusion of the war, the base became the primary defense outpost for both the Hanford site and Grand Coulee Dam. It also served as both a testing and outfitting center for the Boeing Company’s B-52s and KC-135s until 1962. The base was decommissioned in 1965 with the property becoming the jurisdiction of the Port of Moses Lake. 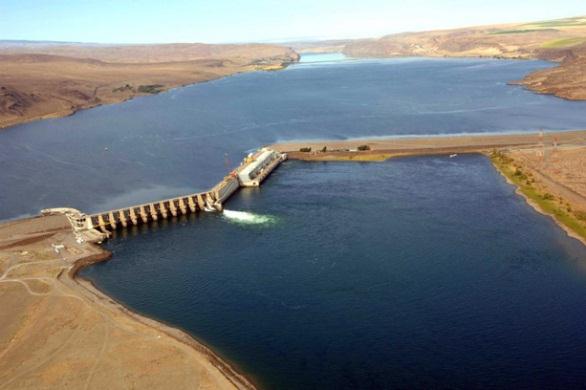 In terms of agriculture, the Columbia Basin Project’s overall plan calls for 1,095,000 acres of irrigated land (60 percent of which lies in Grant County), of which 673,000 acres have been brought under irrigation to date. The extensive irrigation project has fueled steady growth in Grant County’s agriculture industry. The county’s agricultural success has subsequently fueled growth in complementary industries such as food processing and wholesale trade and trucking. Furthermore, inexpensive electricity from Grant Coulee Dam, Wanapum, and Priest Rapids Dams has attracted and retained a solid manufacturing presence in the county.