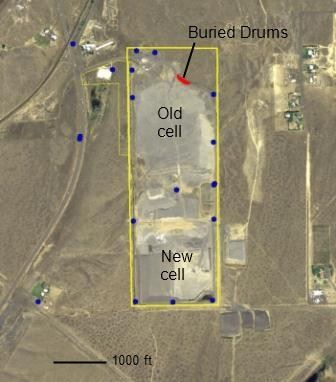 The Washington Department of Ecology (Ecology) and the two potentially liable persons (PLPs), Grant County and the City of Ephrata, have negotiated an Agreed Order (AO) for the Ephrata Landfill. The AO includes an Interim Remedial Action Plan and requires the PLPs to complete a Remedial Investigation/Feasibility Study to guide further cleanup.

The City of Ephrata began operating the Ephrata Landfill in about 1942 and owned and managed it until 1974. Grant County has managed the landfill from 1974 until the present. The landfill ran as an open dump before 1962. It operated continuously as an unlined cell until a new lined cell opened in 2005.

Landfill personnel buried about 2000 drums of industrial waste in August 1975. The Environmental Protection Agency (EPA) added the landfill to the list of potential hazardous sites in 1979. Ecology completed a Phase I site investigation in 1987 and groundwater sampling at the site began in 1988.

After discussions with Ecology in 2000, the county completed Phase I of a voluntary cleanup which included installing two pilot extraction wells. Ecology issued Final Determinations of Potentially Liable Person (PLP) status to the City of Ephrata and Grant County on January 10, 2005. Negotiations for an Agreed order (AO) began in October 2005 and the PLPs signed the draft agreement in December 2006.  The Agreed Order was signed by Ecology on January 30, 2007.  The public comment period did not result in any changes to the document. 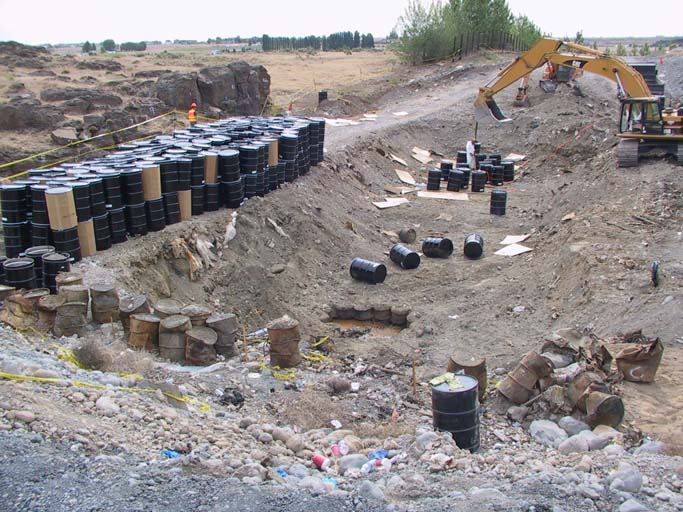 An additional interim action is planned to remove some of the contaminated soil in the northwest corner of the site. The public comment period for the proposed interim action is from October 23 through November 22, 2012.

Fact Sheets for the soil removal interim action are also available in English, Spanish, and Russian.

The sixth schedule extension was approved. The feasibility study (PDF) is now scheduled to be submitted 67 months from the effective date of the Agreed Order, which is the end of August 2012.

The PLPs delivered The Preliminary Public Review Remedial Investigation Report (RI) to Ecology in December 2010. Work is continuing on the Feasibility Study (FS). The interim action of groundwater pumping from MW-34p1 continued during the summer 2011 through late July. Absorbent socks are in place to collect LNAPL.

Completed Remedial Investigation (RI) work includes installation and sampling of 33 new groundwater monitoring wells and sampling of 22 off-site private wells. The final RI and Feasibility Study (FS) reports will be delivered to Ecology according to the revised schedule.

Interim Action and Remedial Investigation tasks are continuing on schedule. Over 2300 buried drums were removed from the north end of the landfill, and the capping of portions of the closed landfill cell has begun. Some remedial investigation tasks are complete. Work will continue to determine the extent of contamination and effective remediation techniques.

Phase I capping is continuing on the old closed cell. The plan calls for completing Phase II of the capping in 2009 to ensure time for remedial investigation work near the buried drum cache. If the soil investigation under the drum cache is completed, Phase II capping could begin in August and the entire cap will be completed before the end of 2008.

All the drums were removed from the buried drum cache on the north end of the landfill. Click on the link to Drum Removal Photos to view photographs. Contractors removed 2353 drums. Forty-six drums were empty and 1038 drums were partially empty. Most of the drums contained liquid but some had solid material. Leaking was noted in 209 drums as they were pulled from the cache. Moderate to heavy damage was noted on 1579 drums. Samples from the drums went to a lab for analyses before disposal. Most of the drums were placed in overpacks before shipment to the disposal facility. All the overpack drums went to an incinerator in Aragonite, Utah . Contaminated soil and spilled drum contents were composited as bulk material. Bulk material that meets the criteria for designation as hazardous waste will be sent to a disposal facility.

Contaminated water accumulated in the bottom of the drum cache. Volatile organic compounds in the water include methylene chloride, acetone, 1,1-dichloroethane, 2-butanone, MIBK, toluene, ethyl-benzene, and xylenes. Contractors made sumps to facilitate drainage of the liquid. Over 6000 gallons of water were removed. Pumping of this liquid is continuing from one of the sumps, which is recharging at up to 400 gallons a day. The contaminated water is stored in a tank on-site and will be transported to a disposal facility. The source of the recharge water will be investigated, but has yet to be determined.

Contaminated groundwater from The Hole was pumped at 1 gallon per minute from EW-1. The water was piped to a newly constructed evaporation pond. The duration of the pumping was less than the projected 100 days due to a pump malfunction, but Pacific Groundwater Group believes they have enough data for Task 6. Results of the groundwater extraction and treatment will be included in their remedial investigation report.

The preliminary exploration for other sources of contamination was completed in 2007. The investigation consisted of 14 test pits, 16 sonic borings, 91 soil samples, and 57 gas probes. Fifteen different volatile organic compounds (VOCs) were identified in the soil samples. Two of the borings were completed as wells. Investigations revealed no hot spots and or non-aqueous phase liquids. Elevated arsenic and nitrate were noted in some samples. Of the 12 VOCs detected in the gas probe samples, the parameters with the highest levels were CFC12, toluene, vinyl chloride, and xylenes. Contractors are currently investigating the soils, bedrock geology, and hydrogeology under the drum cache.